Every pitch you've ever seen 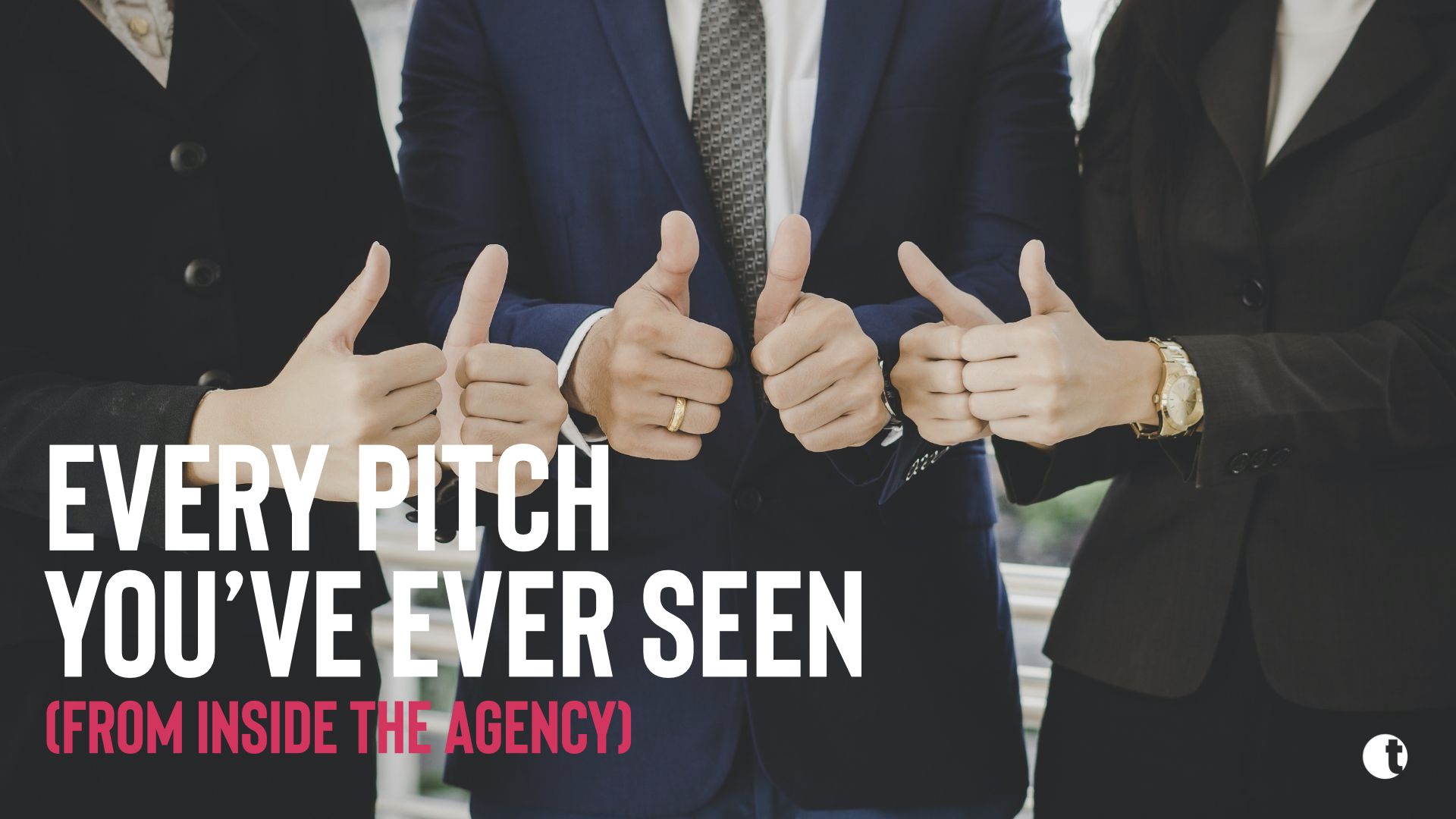 Part two of Marcus's expose of the pitch. This time from inside the agency... uncomfortably true.

I posted recently (How to choose an agency, May 2020), about trying to think about pitches from the client perspective, and some thoughts on what could be different or better about them, and it occurred to me that it might be equally useful for employers to understand a little of what happens the other side of the fence when we respond to a pitch brief, and why you’re getting the pitches you’re getting. There’s a small overlap with the previous blogpost for those who haven’t seen that one, as it does help to explain what’s going on.

The three types of pitch

If you go out to a pitch for an agency to do A, B and C, you’re only fundamentally going to get three responses:

The ‘yes’ pitch
The agency confirms that it can, indeed, do A, B and C, and gives you some examples of how they’ve done it and asserts that they are comparatively better than other people who are also claiming they can do A, B and C. This is the default response.
If every agency does a ‘yes’ pitch, you’ll have to decide by firstly eliminating the ones who you think are wrong about their ability, or indeed are flat lying, and then secondly trying to find something incremental and justifiable between those remaining. This latter step, I understand, can be tortuously difficult…
In my experience, ‘yes’ pitches tend to come second.

The ‘yes, and’ pitch
In this pitch, the agency will answer your brief, but then add in additional capabilities or solutions to problems you didn’t really ask them for directly. If the agency know your company really well, this is likely to take the form of A,B,C and big idea D, where D is something they know is really important to your organisation even though it wasn’t on the brief, and indeed this is often the pitch that wins. If the agency isn’t fortunate enough to have that level of understanding, you may get A, B, C, D, E, F… in the hope that they’ve hit on something that presses your buttons beyond the sea of ‘yes’ pitches.
‘Yes, and’ pitches tend to be the most successful pitches in my experience, but also involve the most decisions, and the hardest decisions, especially when it comes to time (see below…)

The ‘no’ pitch
I love doing the ‘no’ pitch, and you generally only go for this approach when either you’re pretty sure you’re going to win, or alternatively you’re such a long shot for this that you have to outflank the agencies doing ‘yes’ or ‘yes, and’.
In the ‘no’ pitch, you essentially reject large parts of the the premise of the brief and present a radically different way to achieve the objectives in it through different approaches, or perhaps even different objectives and a heavy sales pitch on why the business will appreciate those more.
It’s very clear when this is happening agency side, because people who like strategy are enjoying themselves immensely, and everyone whose primary focus is project delivery thinks this is a terrible idea.
Most of the time, this pitch will lose, and when it does it will lose horribly, but it never comes second, which is my most hated outcome to a pitch process. When it wins, it leaves every other contender in its dust.

Most pitches contain similar things (unless you specifically instruct us otherwise), but there’s some really tough decisions we’re making now about the relative importance of these, and how likely they are to make you choose us:

The bit about us: We know you need to believe in our capability (see earlier comments about choosing between ‘yes’ pitches), so we’re probably going to reassure you that we’ve won some awards and worked with some clients. We know absolutely that every other agency will do this too, but we’re all terrified that if we don’t, we might lose a point. At a more sophisticated level, we’re also trying to show why we think we’re culturally aligned to you and your business, but again we all understand the ridiculousness that if we were perfectly culturally aligned to all of our clients we’d be constant chameleons, with no culture or values of our own. And I’m not sure that would be a good thing.

The bit about you: We’re going to tell you some stuff you already know, just to show we’ve understood you. This isn’t so important in a ‘yes’ pitch, but if we’re going to pitch you anything outside the narrow confines of what you’ve specified, we’re justifying why that is.

The solution(s): We’ve got to show you some imaginative creativity, but also some really pragmatic stuff about how we’d get things done. We will agonise over the balance between those two. Creativity can win a pitch in an instant, but we know that equally you need to get things done, and can’t choose a partner you don’t believe can deliver.

The product: We’ve either developed in-house or invested in access to a tool or piece of software that we’re going to use to solve your problem. Agencies doing this tend to spend far too much time on this, but it might well be the bit they’ll make the biggest margin on if you agree (watch out for regular fees), or indeed they might still have a huge financial black hole to fill for that license/dev. Be highly suspicious of this bit, because it’s really not about you, it’s about them.

The ways of working bit: So I was chatting about this recently with a senior colleague - let’s call him Tom, because that’s his name - and we were discussing the dilemma that this bit is both quite dull and very important. The problem here is that any agency that’s bad at project management and client service isn’t going to tell you that, and indeed if they’re really bad they may not even realise they’re bad at it. So we’re all going to say a lot of sensible things about relationships, partnership, quality, delivery, measurement and KPIs, but you’re going to have a hard time scoring differences even if this is where the biggest differences between the agencies actually is.

The case studies: I hate the case studies. If there’s anything more boring for you than us talking about us, it’s us talking about someone else and their problems. That’s not your brief we’ve answered, and even if it shares one or two similarities with your brief, it probably has far more differences. But we also know if we didn’t show any, you might doubt our capability. You’ll notice if and when you get a case study from me, it’ll be about four sentences long…

So what your agency is actually going to have to do is make tradeoffs, not least on the subject of time. You’ve probably given us a time limit (with or without questions) and some parameters on what must be included, but we now have to work out what’s going to win.

Equally we need to make hard decisions about how much time and risk goes into being interesting. I think video has become a staple of most agencies’ pitching now, but it’s also the bit of every pitch that can go wrong (especially on WebEx (or Teams, especially Teams (Ed.))), that takes up a lot of time in the pitch, and a lot of resources and man-hours before the pitch. Bet you it’s the last bit dropped into the deck… As another example, I like to do something interactive in a pitch - set a challenge, ask some questions - because it shows we’re interested in you, and we’ll be interesting to work with. But I know that this takes up a lot of time, and you might not respond due to procurement rules.

But we’re also thinking holistically about the ‘flow’ and feel of the pitch. It needs to all fit together into a story, rather than a sequence of unrelated sections. The very best pitches bring you on an emotional journey and rise to a crescendo, and are in themselves a demonstration of our skills in communication, persuasion, strategy and influencing.

Ultimately, I thought you might be interested in some of what goes on behind the scenes, so you can understand how you might be able to push agencies in the right direction to get better pitches.

In particular, if you want great ‘yes, and’ pitches, you need to think really carefully about how you’re giving us the access to get to know your organisation, its strategy, its dynamics, its personality, and ultimately be able to spot what D is - that bigger extra thing we can help you achieve. And should I turn up at your offices and give you a ‘no’ pitch, for goodness sake, don’t give me second place…

Insight
The moral case for inclusion
Does community eat content for breakfast?